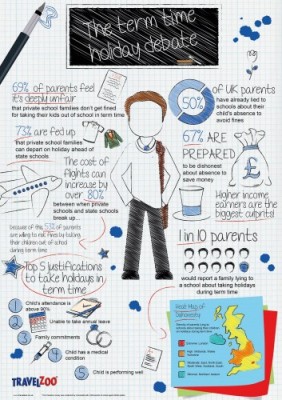 Travelzoo, the UK’s top travel and entertainment deals provider, has announced that its year-long petition to lobby the UK government to reduce or suspend the Air Passenger Duty (APD) during the school summer holidays has come to a close.  With a new education secretary in place, the company has vowed to continue to fight what it terms the Parent Trap – the toxic combination of the world’s highest flight tax, Michael Gove’s fines for term-time holidays and the inflated pricing families face every school-holiday period.

Travelzoo conducted external research with over 2000 parents across the UK and found that Gove’s fines are a bone of contention amongst families, who feel they are being dictated to on what is best for their children.  The survey revealed that over half of all UK parents have already concealed reasons for absence in order to avoid the fines, a revelation that brings the effectiveness of the fines into question.

The research also showed that 53% of parents are prepared to risk the fines and take their children out of school in term time in the future – the main reason for doing this is to save money, followed by ‘avoiding an awkward situation with the school’ and ‘to attend pre-arranged family events or commitments.’  There is also much resentment around the fact that the term-time fines only apply to families with children in the state education sector. Nearly 70% of parents feel it is deeply unfair that private schools are exempt from the fines.

With some counties in the UK, including Cornwall, yet to issue a single fine and other counties in the Midlands issuing thousands of fines, parents are angry about another ‘postcode lottery’ as to whether or not the fines will be enforced.

Richard Singer, Travelzoo’s European managing director and initiator of the campaign said, “Travelzoo’s aim in fighting the Parent Trap is to find a solution that not only ensures children’s education is given top priority, but also prevents family holidays becoming a luxury only available to a minority of UK families.

“We believe that there must be a more flexible way of looking at the fining legislation – such as allowing a few days’ discretionary leave for children who are in primary or junior school and who have a high attendance and performance in school.

“We also believe that our plea to compensate families who do travel in the school holiday dates by removing flight tax on those dates is still an integral part of the overall solution, and we also believe that the UK government should consult with the travel industry at large on what can be done to help bring down the cost of travel.

“The current proposal to stagger school holidays by giving individual schools the choice on holiday dates is flawed as there is no proof that this will bring down holiday prices.  It could in fact simply cause chaos for families with children in different schools and increase the amount of leave parents have to take to cover childcare across the year.

“We very much hope that the new education secretary, Nicky Morgan, will be open to meeting with the UK travel industry and working with us and her colleague Helen Grant the Sport, Tourism and Equalities Minister so that collectively we can find a better solution to the Parent Trap.”