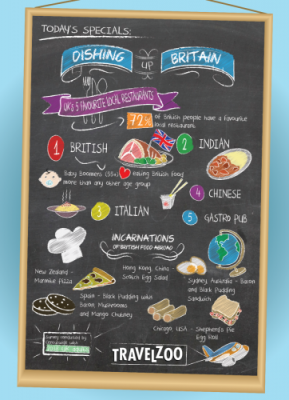 The nation’s love of traditional cuisine shows no sign of abating, as survey findings revealed by travel, restaurant and entertainment Deal Experts at Travelzoo show that people favour restaurants serving British food over all other cuisines.

More than 2000 adults were polled and asked to rank their preferences when it comes to dining out in their local area. In addition to selecting British food as their cuisine of choice, over 70% of people said they have a favourite local restaurant they frequent regularly.

Heather Rogers, General Manager of Travelzoo’s UK restaurant deal business said, “British consumers like to think of themselves as adventurous in their dining habits, but we have found there is still a real affection for traditional British food. When you consider the incredible success of programmes such as “The Great British Bake Off”, as well as the general evolution of the British restaurant scene, it’s not that surprising that as a nation we are proud to support British restaurants. Thankfully things have changed dramatically since the days when scampi and chips was the most exotic thing on the menu in UK pubs and restaurants!”

But what is British food today? To take a look at the perception of British cuisine abroad, Travelzoo’s teams of restaurant Deal Experts in the company’s 25 global offices reviewed the menus of so-called ‘British restaurants’ in their region and the findings were rather unexpected. In addition to finding something called ‘shepherd’s pie egg roll’ in a restaurant near Travelzoo’s Chicago office, the teams also found the following weird and wonderful interpretations of British food:

Back on home soil, Indian restaurants were the second-most popular dining choice, followed by Italian and Chinese. The survey also uncovered regional differences. For example, Brighton's pizza and pasta lovers voted Italian their number-one choice, while Scots, Londoners and Mancunians plumped for an Indian curry over British cuisine.

In terms of frequency of dining out, 18-24-year-olds are the most avid restaurant-goers, with nearly 30% dining out several times a month, compared to 16% of those aged 45-54. This age group are also the biggest fans of American food, with nearly a tenth claiming this as their all-time favourite type of cuisine. Interestingly, of all adults polled, 18-24-year-olds are the least enamoured with British food – just 14% chose it as their favourite.

The complete list of Britain’s 10 favourite restaurant cuisines is as follows:

British Food Fortnight runs from 20th September to 5th October, and to support this initiative Travelzoo has worked with over 65 UK restaurants to pull together the very best British dining deals including a gourmet deal at London’s Savoy Hotel for less than £50 per person. The full list of UK deals can be found here: http://www.travelzoo.com/uk/local-deals/gourmet-cuisine/London

* This survey was conducted by independent third party, Censuswide, who polled 2038 UK adults in July 2014.