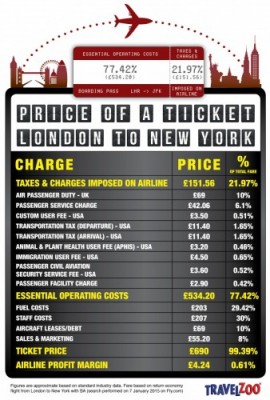 Chancellor George Osborne announced this week that the five year low cost of oil should be passed on to the consumer via lower flight prices, sparking much debate about potential cost reductions flight travellers can expect in the coming weeks. Travelzoo’s flight Deal Experts predict that the main beneficiaries will be travellers who opt for a driving holiday either at home or on the continent and that flight prices are not likely to drop in the immediate future.

Joel Brandon-Bravo, Travelzoo’s UK managing director, said, “Historically, low oil prices have not necessarily led to an immediate fall in flight prices. For the major airlines we would however expect some softening of the headline price in the medium term as the fuel surcharges will inevitably fall. This will probably take around six months because the airlines have hedged positions that protect them from volatility in the fuel market (either way) but they will now be working to unwind the hedges and take advantage of lower fuel costs.

“It is also typical of the government to point the finger of blame at the travel industry when up to half of a flight’s cost is often made up of taxation and other fees airlines are obliged to pay to airports and authorities. The British public will no doubt be surprised to hear that many airlines are operating at a less than 1% margin, even with falling fuel prices. Fuel costs make up around a third of the total cost for airlines such as British Airways, but this percentage can go up to over 50% for the low-cost airlines.

“At this stage the only immediate benefit will be for those who opt for a driving holiday – especially if they drive to Europe where the weak euro is also offering good savings on accommodation and food.”

Flight prices are notoriously complicated to understand and Travelzoo’s consumer research showed most people are completely baffled as to where the money goes from their plane ticket. To clarify the situation Travelzoo has broken down the ‘anatomy of a flight ticket’ to help explain to confused consumers where the money goes when they book a flight. (See Travelzoo Flight Price Infographic)

Travelzoo’s top tips for getting the best flight bargains: