Stressed Out UK: A Nation Overwhelmed 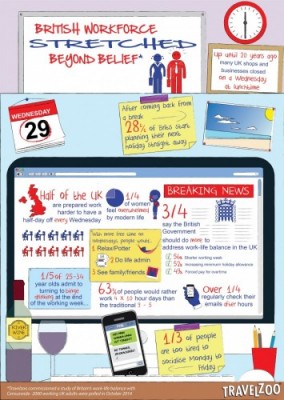 This Wednesday marks National Stress Awareness Day and Travelzoo, the UK's top travel and entertainment deals provider, has found that over two-thirds (68%) of full-time workers in Britain feel they are working too many hours every week. Added to this, half the nation would be in favour of working longer days in order to go back to half-day Wednesdays (a tradition phased out 20 years ago).

The findings reveal that Brits think it is unfair that European neighbours such as the French have government-enforced restraints on their working hours and that the Dutch regularly work a 4-day week, whereas in the UK little or nothing is done to protect employees from working late into the evening without receiving paid overtime.

Of the 76% of Britain's workforce who want the government to do more to address work–life balance, 56% think MPs should introduce shorter working weeks and 52% say that increasing the minimum holiday allowance would help.

British workers would also like more flexibility across the week, with 63% of employed UK adults saying that given the choice they would rather work four 10-hour days rather than the traditional working week of five 8-hour days.

As part of the study Travelzoo worked with respected psychologist Dr. Linda Papadopoulos who commented, “Juggling the demands of a career and personal life is no easy feat, and with our ‘always-on, always-contactable’ working culture, even holidays don’t guarantee the downtime they should. The truth is that our ability to gain a healthy work-life balance is key, not only to a healthy family life, but also to more productivity in the workplace.

Something like Travelzoo’s campaign to reclaim Wednesdays as a midweek point where we pause to take stock of where we are, and ensure that we have the balance we need, is a good start -- not only for employees, but companies too. It’s not just about working more hours, but about fostering a culture of appreciation. Businesses should afford their staff enough time to be individuals as well as employees, so they feel valued, leading to greater job satisfaction, engagement and overall happiness."

The survey highlighted the impact of the "constantly connected" culture now prevalent amongst working professionals in the UK, as more than a quarter said they regularly checked emails outside of working hours.

Joel Brandon-Bravo, Travelzoo's UK managing director said, "Holidays are often the only opportunity people have to really switch off, and even then the ubiquitous smartphone means it's hard for many people to truly remove themselves mentally from the office. At Travelzoo we have a no-email policy for employees taking holiday, and we also encourage our teams to leave on time or a little earlier on Wednesdays as we see productivity and morale maintained by giving people a little mid-week respite.

"We can see from the research that half of British people would relish the chance to have some extra time off mid-week. Let's encourage the nation to resurrect and adapt the half-day Wednesday mentality of the past, perhaps by just encouraging people to get away on time mid-week rather than working late, and also by encouraging people to try a new activity or spend time with family and friends. A bit more free time is the key to boosting our morale, both at home and within the workplace."

Further findings from the Travelzoo Take Back Wednesdays survey showed:

Starting this Wednesday, Travelzoo is encouraging its employees and members to take a mid-week mini-break and try something new each Wednesday. There is a social media campaign running alongside this which uses the hashtag #lovewednesdays.

* This survey was conducted by independent third party, Censuswide, who polled 2000 working UK adults in October 2014.

Stressed Out UK: A Nation Overwhelmed